Financial Transaction On Your Phone

This is second in a series about mobile commerce. The first post was a case study about mobile wallets in Japan. In this post I review the efforts by US banks and financial institutions such as credit card companies to push mobile commerce as another channel for their clients.  This post is based on a study and report by Information Week. As you go through this, compare this with the experiment in Japan, especially how applications are loaded on the phone … it will be interesting to revisit this after a few months.

Citi Mobile can be downloaded to 100 cell phone and smartphone models. It’s initially available in California, but Citibank says it will be out in other states by midyear. The app has been more than a year in development, and Citibank execs think U.S. cell phone users are ready to do more than talk and text on their phones. “They can manage their accounts while sitting at a red light in their car,” says Steven Kietz, Citi’s business manager for enhancement services and e-commerce.

Information Week is not so sure. As they say: There will be a growing market for mobile banking when there’s a need for immediacy, like emergency fund transfers and balance checks, predicts James Van Dyke, president of payment consulting firm Javelin Strategy and Research. But his take on a mass market for mobile bill paying: “It’s ridiculous.” The banks beg to differ, though. Wachovia, which has a mobile offering, says mobile bill paying is one of the top customer requests.

Since the Citi Mobile app resides on the phone, it’s faster and offers a graphics-intensive interface that’s closer to online banking than text-heavy Web-based apps. Customers select the Citi icon on their phones to access accounts instead of navigating through multiple Web pages on a tiny screen. They’ll also receive new features automatically whenever Citibank makes an upgrade available.

Bank of America took a different approach, launching its WAP-enabled Web-based mobile banking service in February. Most mobile browsers can access the service, which lets Bank of America customers check account balances, pay bills, and transfer funds. “We chose to go with a WAP application, so that everyone can access it,” says Sanjay Gupta, an e-commerce executive for Bank of America. The downside: WAP displays information mostly in text form without rich graphics.

More from the report:

Wachovia also went with a Web-based app, launching its Wachovia Mobile service in December. It works only with Web browsers that come on smartphones running Microsoft’s Windows Mobile 5.0, Research In Motion’s BlackBerry, and the Palm OS. More than 50,000 people access Wachovia Mobile each week, says Ilieva Ageenko, the bank’s director of emerging applications. 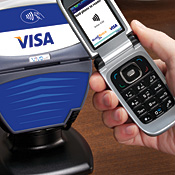 But Wachovia has another option in the works. It has teamed with AT&T, which will offer later this year mobile devices preloaded with a mobile application for accessing Wachovia’s and other bank’s services. Preloading the app makes it easier to use on the phone. By getting together with AT&T, Wachovia has “enough footing to reach out to this huge base of customers,” says Ageenko.

But preloaded apps have their downside since the number of customers a bank can reach is limited to the number of phones its app is loaded on. But even with downloaded and Web-based apps, banks may have to work hard to convince customers to sign on. “Instead of banks giving away toasters, maybe they’ll give away phones,” says Richard Crone, of Crone Consulting. Also, putting an app on a mobile device could increase calls to the support center as people struggle to get an app to work on a particular device, thus increasing a bank’s costs, he says.

Besides usability and access issues, security looms as a potential problem. Mobile applications preloaded on cell phones mean personal information will be stored on phones, posing a huge risk. The good news is that the banks are putting a lot of effort into securing their mobile offerings. With Citibank’s Citi Mobile service, the phones don’t store any personal information and transactions are secured with 128-bit encryption, the same technology that’s used at Citibank.com.

Customers accessing Bank of America’s online banking service from their cell phones are protected by the bank’s SiteKey security technology. Data also remains encrypted when it’s sent between the phone and the bank. Once AT&T rolls out mobile devices with Firethorn’s preloaded banking application, it will have the ability to remotely wipe devices clean of personal data if they’re lost or stolen.

MORE THAN JUST MOBILE BANKING
Credit card companies MasterCard and Visa have their own agenda. They want to convince users to use cell phones as credit cards for quick purchases. The report presents a few updates on this:

MasterCard and Visa have tested cell phones with embedded Near Field Communication technology that enables short-range wireless communications between devices. The next step is to team with wireless carriers and financial services providers on actual products. MasterCard says it’s in discussions with several carriers and financial services companies.

Visa is testing a mobile application that will let consumers use their cell phones for payments and online purchases. Customers will have access to their credit card account information and will receive account alerts and mobile coupons when they use the service. Visa also is partnering with chipmaker Qualcomm and phone maker Kyocera on contactless payment-enabled phones.

With everything that credit card companies, banks, and wireless carriers are doing, people’s cell phones should soon turn into more than communications devices. “It truly is disruptive technology,” says consultant Crone. The question is whether consumers also will be as excited about mobile banking and contactless payment apps.

KESC goes for innovation to facilatate bill payment by customers →

3G Steep Climbing – Yet To Reach The Top →

5 Responses to Financial Transaction On Your Phone