HTC Radar is the latest Windows Phone device released by HTC and recently launched by Mobilink; it runs the latest version of Windows Phone OS available, Mango. Lets take a look on it before proceeding with the review: 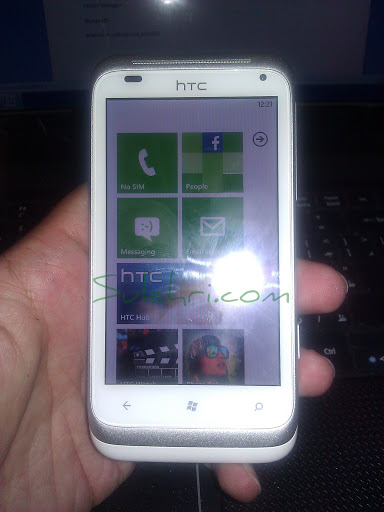 HTC radar has a very corporate touch to it while at the same time also being remarkably user friendly for any purpose. It has a metal body which gives a nice elegant feel to the fingers. Unlike some other phones, the metal feel to it does not affect the phones weight at all. At 137g it is very light and easy to handle at all times. The metal feel on Radar also gives a good grip when held in hands.

Next thing to consider is its size. With dimensions of (120.5mm x 61.5mm x 10.9mm) it looks really classy and it is very easy to get a grip on. It’s not that long and it’s not thick at all hence making it a very fun phone to deal with because it also has a little bend on the bottom side of it where you can see the compulsory 3 Window phone buttons.

At the back we can see the 5MP camera and the LED flash light along with the speaker that gives crystal clear sound. On the top there is a headphone jack along with the power button too. There are Volume and camera buttons on the right, microUSB/ charging slot on the left of the phone. Unlike many other HTC phones, HTC radar has no option of adding a memory card because there is inbuilt 8GB memory inside the phone.

All in all, this looks to be a very good phone and even though it might not attract people who want their interests in one screen (because it is a Windows phone) this is basically more of a corporate phone. It surely oozes class and user friendliness and for people who would like to buy it. I give it a 7/10. The only drawbacks are for those who don’t like Windows phones. It is like every HTC phone in the sense that it is extremely fast and has a great touch that responds well to every need of yours.

[Update] We had tough luck uploading HTC Radar Review video, but finally we succeeded in getting it on YouTube.

The HTC Radar comes with traditional HTC unibody, its metallic body with smooth plastic at bottom and top of its back makes it look elegant and smart. It has 3.8 inches S-LCD 480×800 pixel (WVGA) capacitive touch screen with nice sunlight legibility and reasonably bright colors but comparatively low pixel density i.e. (~246 PPI). It has a secondary VGA camera on its face placed above its touch screen and 5MP camera is at its back with LED flash, speaker is next to camera. The 3 traditional windows phone capacitive keys i.e. Back, Home and Search are well spaced and place at bottom. At right side of HTC Radar there is a volume control and camera button, camera can be directly activated from locked screen by long pressing camera button. On left side microUSB is found which may create problem for left handed people using the phone while charging. 3.5mm jack is on top with power button. Its bottom has a removable cover which allows inserting only SIM card, the memory card slot is missing as 8GB internal memory is available. The battery is not user-replaceable, which we see as a disadvantage but having a non-replaceable battery adds to the slimness of the phone. It has a powerful 1GHz Scorpion processor and Adreno 205 GPU.

The HTC Radar comes with Microsoft Windows Phone 7.5 (mango) operating system with HTC green tiles and black background. Its user interface is smooth with live tiles which display information, different shortcuts and allow direct access to selected softwares, these tiles can be easily edited and personalized. The way of information displayed on the tiles is improved, you can view social network update of you friends on a Group tile, picture tile displays animated slideshow of pictures and you can search applications by just typing their name in application list. The lock screen unlocks by swipe and its background can be easily changed.

Windows Phone till now do not allows you to manage your files & folders and even do not allow transferring them via blue tooth, the app store is smaller than android app store which makes less applications available to users. You can use feature of multitasking which allow you to access last used 5 to 6 apps but the older apps need to be re-launched for use, you can turn off this function from settings to save battery.

Windows Phone Mango update supports voice recognition which enables the users to dictate a text message or to listen any received message and you can even instruct the mobile to initiate a search in search engine by voice command.

The Mango update gives a great social networking experience; it provides better and faster synchronization. Call, text messages, email, Facebook wall, and Twitter mentions all appear when you open a contact. You can also get access to online pictures and galleries from social networks easily. You can make contact groups and pin then on your home screen as a live tile. You can pool your e-mail from your all e-mail accounts in your Window phone, what you need to do is to connect all your accounts to you HCT Radar.

As HTC Radar is a windows phone Microsoft office integration is a key function of this smart phone. The Mango update enables the users to sync documents between PC and windows phone using SkyDrive which provides 25GB free storage capacity. The main Office hub has the categories i.e. Documents, Location and Notes. With Microsoft office it is easier to create, edit and share several important documents but you can’t share them via Bluetooth or by e-mail editor, documents can only be shared using the Office hub. OneNote is a useful and comprehensive note taking tool which allows to perform several useful tasks, it can be used as a to-do list and you can pin it on the main screen.

To give a HTC touch The HTC Radar has some interesting HTC apps like Notes, Lists, Calculator, Converter etc .

The Xbox Live is a gaming hub, it has many feature similar to x box. The spot light feature enables you to see the requests and game invites from your friends. Xbox live do not support all the games, there is a separate section for the games supported by the Xbox Live. HTC Radar’s 1GHz processor is powerful enough to play high quality graphic games like Need for Speed, Kinectimals and Angry birds.

In the windows phone Mango update there’s a new People tab which helps to browse pictures of your contacts and groups in the Picture hub. Previously last viewed picture automatically appeared at the background of the hub, now u can set a single picture or a set of pictures to be used as background picture which give more personalized look to the Picture hub. In new update picture editing apps are synchronized with the Picture hub which enables to edit and to add effects to the pictures direct from the Picture hub. You can share videos and pictures via e-mail, messaging, Facebook or Sky Drive. The HTC Radar does not support DivX or XviD video formats. Even a single video, song, radio channel can be pinned as a live tile on home screen.

The HTC Radar’s 5MP autofocus camera has a wide-angle lens which helps to capture wider images and back-side illuminated sensor which enhances camera performance in dim light. The secondary front camera is VGA which is placed above the touch screen for video chat. The camera app has several settings to create effects on a picture. Amazingly the camera can be directly accessed from the lock screen by long pressing the thin camera key. Its video results were not at all impressive in terms of colours, smoothness, details and overall quality. Its camera performance is not 2x better than HTC HD7 (as asserted by officials in the HTC Radar meet up), lets see a few images taken fom HTC Radar and HTC HD7 for comparison:

The HTC Radar supports quad-band GSM/GPRS/EDGE and dual-band 3G with HSPA. It has standard Wi-Fi (with hotspot) and Bluetooth connectivity, but Bluetooth is with limited use as you can’t transfer files. The only ways to transfer files is by connecting to PC using Zune app or to sync with SkyDrive. The latest version of Internet Explorer is 7.5 which is available in HTC Radar.

The Bing search helps to search you market apps and other stuff, now it can perform two new functions i.e. it can work as bar code reader and song recognizer which were previously performed by different apps. The Bing map is a useful app which offers many helpful functions to help in navigation but for Pakistan its map support is extremely poor

The phonebook is now replaced by People hub and instead of contacts term Profiles is used in WP 7.5. The profile contains all updates and data from all social networks and email addresses of that contact. Contacts are arranged alphabetically and you can pick contacts by searching them by first alphabet of their name, a list of all profiles with names starting with the selected alphabet will appear.

The HTC Radar has an excellent and loud call quality and a good call reception. The live tile and the lock screen displays only the number of miss calls, the details off calls can be viewed in call history. It has a voice dialing option but it cannot differentiate between two people with same names but different sir names. You can download ringtones from market but unfortunately you can’t set a song or ring tone from your audio collection. It has good quality loud speaker with fairly high volume.

The HTC Radar provides you with a wonderful messaging experience. There are material changes in the messaging in the latest Mango update. Threads of text messaging, Facebook messaging and (WLM) Windows LiveMmessenger are combined. Messaging is now divided in two heads i.e. threads (offline) and online (friend available online) which makse messaging and online chatting easier. You can forward, edit, copy and paste the messages, you can’t send any attachment in Facebook chat in messaging, for this purpose MMS is used. The HTC Radar uses the standard Windows Phone QWERTY key board which we found comfortable to use, it has sound feedback but no haptic vibration feedback.

HTC Radar is priced reasonably at Rs. 38,000 in Pakistan. So if you are looking for a sleek UI with blazing fast speed the WP Mango powered HTC Radar is one of the best options around. Here are some pros and cons

Finally, Credit to Syed Omair Ali  for shooting the video with his HTC HD7 and editing it & to my younger bro Abdullah for writing the initial draft.