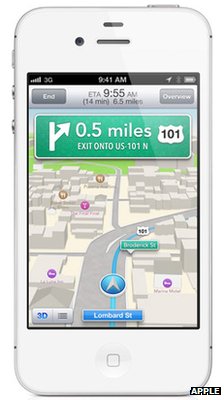 Apple reviled the new Apple iOS6 which is the software that runs on its iPhone, iPads and iPod touch. The amazing thing is that it has abandoned the Google Maping system and now instead it has its own Mapping system which is powered by Tom Tom. Apple’s mapping app also has some powerful 3D mapping, which Google also released last week for its Android platform.
Software will be out for beta testing this Tuesday and will be given to the public in Autumn. It’ll come as a free update for the iPhone 4S, iPhone 4, iPhone 3GS, iPad 2 and 4th Generation iPod owners.